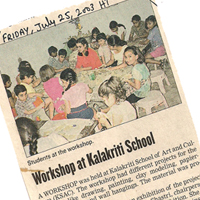 A WORKSHOP was held at Kalakriti School of Art & Culture (KSAC). The workshop had different projects for the children like drawing, painting, clay modeling, papier mâché, pottery and wall hangings. The material was provided free to children.

At the end of the workshop an exhibition of the projects made by children was held. Archana Shastri, chairperson Fashion Design, NIFT, inaugurated the exhibition. She appreciated the efforts of Prashanto and Kirti who painstakingly worked hard towards the growth of the institute.

The workshop started with drawing and painting classes in which the children were free to draw on the topics given. It was followed by papier mâché and pottery sessions. 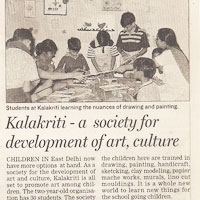 FOR EAST Delhi children it was an unforgettable experience. Like every year Kalakriti School of Art & Culture organised a summer workshop for the kids in Chitra Vihar.

Children in the age group of four to 15 years took part in the event. About 35 children from all over Delhi participated. The workshop was a learning experience as kids got to know the different aspects of drawing.

Clay articles moulded by children on the potter's wheel as well as by hand were displayed. The children participated in painting, paper craft, papier mâché, clay modeling etc.

"We hold such workshops every year and the basic idea is to bring to fore and hone the hidden talents of these kids. The more the options that children get, the more expressive they become. It is also a way to rteach them about nature and environment." Says Kirti B. Sarkar of Kalakriti.

A large number of people visited the exhibition and lauded the kid's efforts. The chief guest was Dr. Hem Bhatnagar Ex-Principal of Jankidevi Mahila College.

The children were given certificate of participation.

Colours of life on canvas

WORLD THROUGH a child's eyes is spontaneous depiction of the real world, with all the minute details, Children were at their creative best at a recently oragnised Kalakriti's drawing competition in which more than 200 students from 12 societies in East Delhi participated.

There were colourful illustrations, from simple balloons to anything that fascinated young artists. It was purely their idea of a beautiful world, worked upon with amazing details.

Though children were given ordinary topics, their work gave an impression of the extraordinary. For 15 year old Chetan Mongia, a beautiful world was all about blooming trees, chirping birds and a pollution free environment. Ten year old Neha Saha from Ramakrishna Vihar who bagged the first prize chose the topic 'My Family'. She beautifully depicted that a family is incomplete without elders. Five year old Rishabh Jairath's depiction of 'My Pet' was just wonderful. The child did not bother about the intricate of drawing. He simply concentrated on what his feelings were for the pet. The painting depicted him hugging his little cat.

For nine year old Sudhanshu Tiwari from Nirman Vihar, beautiful world was all about the towering World Trade Towers, untouched by any terrorist activity.

"We gave simple topics to the children in the age group of five to seven like: My Pet, Mt Train, Balloons and Christmas Party. The basic idea was to help them use as many colours as possible, " says Kirti B. Sarkar, one of the and the organizer of the event. 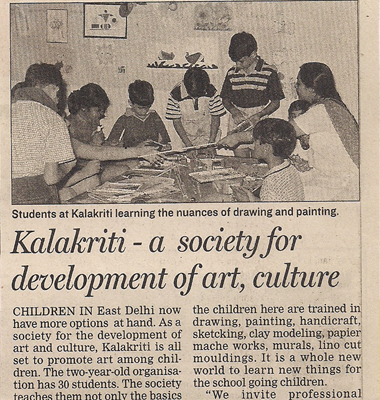 Kalakriti - a society for development of art, culture

CHILDREN IN East Delhi now have more options at hand. As a society for the development of art and culture, Kalakriti is all set to promote art among children. The two year old organization has 30 students. The society teaches them not only the basics of art but helps them to even clear exams for colleges of art.

"We invite professional artist and hold exhibitions for the children to promote the interest of children and organize workshops to encourage budding artists," says Prashanto.

For Kids and Adults